Mammary tumors, one of the most common diseases in dogs, pose a great threat to life in advanced stages and greatly reduce the quality of life. It is possible to eliminate breast tumors, which are mostly caused by genetic reasons, with the least damage with early diagnosis and treatment. For this, regular control, early diagnosis and intervention are vital in dogs as in humans.

The Chief Physician of the Near East University Animal Hospital, which has performed more than 100 breast tumor surgeries since its establishment in 2014, Assoc. Prof. Dr. Osman Ergene shared important information about the issues to be considered in cases of mammary tumors in dogs.

Dogs are among the living species in which mammary tumors are most common
Assoc. Prof. Dr. Osman Ergene said that dogs are one of the creatures in which mammary tumors are seen most frequently, and emphasized that these tumors are malignant at rates ranging from 41 to 53 percent depending on the breed of dog. This increases the importance of early diagnosis and treatment. Stating that malignant mammary tumors in dogs can spread to the body quite quickly, Assoc. Prof. Dr. Osman Ergene said, “Tumors in the mammary of the dog spread to regional lymph nodes, lungs, liver and other parenchymatous organs, increasing the life-threatening situation. Although rare, metastases can also occur in the bones and brain.”

Stating that sex, age, race, body weight, endogenous hormones, growth factors and sterilization history are the determining factors in mammary tumors in dogs, Assoc. Prof. Dr. Ergene pointed out that the risk of breast tumors can rise to 4% at the age of 3-4 years, to 29 percent at the age of 4-8 years and to 67 percent at the age of 8. Mammary tumors, which are more likely to be seen with increasing age, are more malignant in older dogs and generally benign in young dogs.

Which breeds are the most risky?
Chief Physician of Near East University Animal Hospital Assoc. Prof. Dr. Osman Ergene emphasized that the risk of mammary tumors is higher especially in hunting breed dogs. The most risky breeds are Daschund, Spanish Cooker, Terrier and German Shepherd dogs.

Gender is also one of the most important criteria. Mammary tumors, which are frequently seen in female dogs, can be seen rarely in male dogs. Assoc. Prof. Dr. Osman Ergene says that one of the most effective measures in breast tumors is sterilization. While the risk of mammary tumor decreases to 5 per thousand in dogs neutered after the first rut, the risk can increase up to 8 percent in those sterilized after the second rut.

Early detection saves lives!
In the diagnosis of mammary tumors, information about when the tumor was noticed, the time elapsed, the growth process, the last estrus date, hormonal or medical treatments that may be related to the tumor, and whether the animal has had a previous sterilization operation are important factors. Since it is difficult to obtain precise information about when the tumor begins to form, the growth rate can be important in terms of treatment and outcome.

Over 100 breast tumor cases treated at Animal Hospital.
Stating that breast tumors vary from those consisting of a simple nodule with clear borders to common and ulcerated masses of which borders cannot be determined precisely, Assoc. Prof. Dr. Osman Ergene warned that for correct diagnosis and treatment, the treatment center should be fully equipped from imaging devices to laboratory equipment. Stating that the Near East University Animal Hospital has a great experience in the diagnosis and treatment of mammary tumors with its fully equipped services, Assoc. Prof. Dr. Osman Ergene said that they have performed more than 100 breast tumor operations since 2014. Assoc. Dr. Ergene says that in such cases the most effective method to increase the life expectancy and quality of life of the sick dog is surgical intervention. 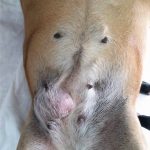 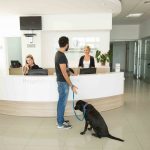